Over the years, there have been a handful of really original, ground-breaking animated cartoons.  The first I remember was "Rocky and Bullwinkle."  Later on, we got gems like "The Powerpuff Girls," "Phineas and Ferb," "Billy and Mandy," and, of course "Adventure Time.  Now I've found another one, "SheZow."  It should be kinky, but it isn't, believe it or not.  Young Guy Hamdon finds a ring that belonged to his late aunt Agnes, who, as it happens, was a superhero named "SheZow."  His twin sister, Kelly, tells him  that the ring is what made their aunt SheZow, and that whoever puts the ring on will become SheZow.  Guy scoffs, defiantly puts on the ring, and, of course, hilarity and heroism ensue.  At this point, we're thinking that the ring was actually meant to be worn by Kelly, because Guy transforms into what looks like a female superhero. Later, it's more ambiguous. In fact, he remains male, but the whole concept of SheZow, from the costume to the special abilities, is completely female, and Guy can't change any of that, and, except for his deep voice, he looks convincingly female to everybody.  That's his "lazer lipstick" he's brandishing there in the illustration, and other than the generic super-strong and super-fast superhero attributes, he has a superslap and a sonic scream.  And he uses "vanishing cream" to, well, vanish. On one occasion he generates a devastating wind by batting his eyelashes. 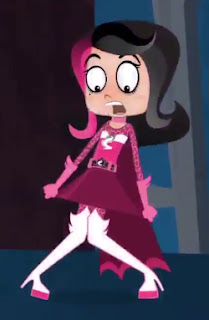 But it isn't kinky.  In the first place, Guy's only 12 or 13, and the show is totally devoid of any kind of sexual innuendo.  The kids (Guy, Kelly, and Guy's pal/sidekick) are definitely in the cootie stage, and there's no hint of any sexuality going on, so Guy is a girl in the same way that Batman is a bat, i. e., he isn't — He's just dressed up like one.  Another analogy.  SheZow isn't a TG any more than Batman is a furry.  Brrr!

BTW, this is being broadcast in Australia and only in Australia so far, so how do I even know about it?  Here's the deal:  A fan came across Kyla May's Website, and contacted me to ask if she was any relation (for those who know me only as Baloo, my name is Rex May).  Well, she definitely isn't, as she's Australian and I'm a Yank, but it's flattering, because a look at her site shows that she's one heck of a cartoonist.  In fact, she's like me insofar as she has a "cute" style, though the resemblance ends there.  Looking further at her site, I came across "SheZow" and had to follow up on that, and I found all this neat stuff.  To begin with, I assumed that the whole business was an Australian thing, but then I found out that the concept and the writing come from Obie Scott Wade, who is as American as I am.  Here's his website.  Before we go any further, take a look at episode one of SheZow:

Being a cartoonist myself, of course I think of origins and influences. Here's how it happened.  Obie included a short "SheZow" feature as an episode of "Shorty McShorts' Shorts," on the Disney Channel back in 2007.  You can watch it HERE.....  Got it?  Note that it's virtually identical to the later show, but that the character design has been monumentally enhanced by Kyla May's design.  What was just cute is now funny cute. 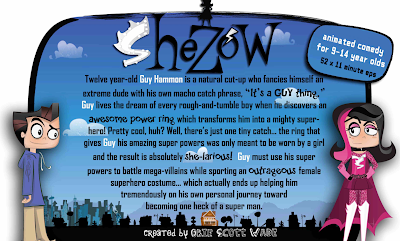 But then I thought a little further.... "SheZow" — that had to first enter Obie's mind as a variant of "Shazam," most likely "Shezam."  I was close.  It was "Shee-Zaam."  Other than the whole Captain Marvel "Shazam" thing, the influences, both on the art and the writing, are manifest — Batman of course, in both its serious and frivilous incarnation , the Powerpuff Girls, James Bond, that show with the talking car, all of Jay Ward's stuff, a slight Tennessee Tuxedo sensibility now and then, most probably Ranma, Star Wars, and so on and so on.

So behold the genesis and development of a very clever and funny feature.  When this gets to Japan, they're gonna go nuts, and rightly so.